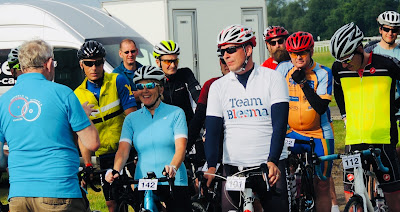 Our BEVA executive assistant Fiona who completed the 66 mile challenge has asked me to write you a blog about how I intended doing the 30 mile cycle on the 3rd of June but accidentally ended up cycling the 66 mile challenge which I playfully call Route 66’. Being Irish necessitates an innate talent for taking “the mick” out of oneself so I gladly accepted the opportunity to write my ‘Route 66’ blunderful revelations.

I will begin by explaining what my mid breeding season BEVA sportive preparation actually consisted of. While the rest of the Donnington Grove team committed themselves to regular weekend cycles, I only managed one cycle that was 24 miles long wearing an ugly horse-riding helmet “borrowed” from the practice. After only 24 miles of cycling, one of my regular stud farms found my new gait concerning and gave me some bicycle shorts. This in itself was enough to put me off further training. I spent the next few weeks preceding the challenge avoiding Bruce who would have sacked me if he found out that I had no intention of cycling 91 miles.

On Saturday following stud rounds I set off to Yorkshire. I bought a helmet in Halfords that morning purely to blend in with the other cyclists. It was an easy journey following the two other Donnington Grove vehicles and listening to their terrible attempts at road trip singing via whatsapp. Approaching Birmingham it dawned on me that I had left my gift bicycle shorts and any form of comfortable underwear at home in Newbury. But this wouldn’t matter since I was only doing 30 miles - right? I met the rest of the team in a restaurant that evening and was surprised to see them looking rather apprehensive. This was because Bruce had taken them for a drive around the 91 mile course and consequently driven them ... around the bend. It seemed like the only thing keeping a smile on the faces of at least the men on the team was the prospect of meandering their way across two hills they affectionately christened “the bosoms of Yorkshire.”

Let me tell you about the Donnington Grove team. Georgio is a cool, collected Italian surgeon who had put in plenty of training. Emma, a Kiwi housevet who has cycled thousands of miles around South Island was calm and confident. Surgeon Alastair hails from Yorkshire, can lift three times his own body weight, and looked similarly confident. Naomi, the most experienced housevet is a keen cyclist so the impending pain didn’t seem to faze her. Marc, one of DG’s talented ambulatory vets was an enigma to me. I had not seen him on a bicycle but he definitely had all the gels and electrolytes to complete 91 miles. Abbie, also a Donnington Grove housevet was petrified but remarkably determined. Bruce, our team leader and motivator, who needs no introduction to BEVA members, had very worryingly run out of words.  Then of course there is yours truly, smug at the prospect of cycling a mere 30 miles and enjoying coffee and cake along the way. 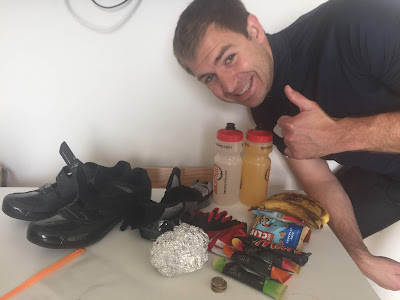 I set off with a banana and half a bottle of water. I’d be back soon. With my head down, I cycled with determination. I skipped Hovingham’s most amazing coffee shop (already obliviously off course) in order to quickly pedal round to the finish line, drive to the Donnington 91 milers and offer them moral support and Volvo draft. As I kept cycling with blinkered focus, it started to dawn on me that I had been cycling for some time now and that there seemed to be more hills than I had anticipated. Upon acquisition of internet signal, google maps confirmed that I was 45 km away from the finish line by the shortest route and I had been cycling for almost 3 hours! I called my most patient friend Shelley who pulled up the routes on her computer and confirmed that since I had passed through Kirkbymoorside (35 miles from the start) I was in fact on the 66 mile challenge. Shelley is still wondering how I navigated my way through vet school, let alone this thing called life.

I sat in the grass and pulled out my banana and half a bottle of water and considered my options ... of which there were none. I had to finish the 66 mile challenge. I was lucky to be discovered in said position by Gem who is a small animal vet at Calder vets in York and her husband Steve. They offered me all the moral support, patience, and water to get me through a despondent middle third of Route 66. Antique tractors offering a draft for 5 miles around Malton were also welcomed. Team Donnington’s geographically challenged member finished 66 miles strong in 6 hours 12 minutes, a time that somewhat softened the stupidity of ending up so far off course. I was just happy that I made it in time to cheer on the Donnington Grove 91 milers on their arrival back.

One person on the Donnington team deserves a very special mention. This is the story of a girl who does not love cycling, got attacked by road bollards and had a nasty fall in the first stretch of the 91 mile challenge, but still refused to abandon the challenge. She continued to complete more than 91 miles over Yorkshire highs and lows. Abbie finished with a damaged ankle and a giant smile on her face. She also completed a day of work the following Monday. She is the newest qualified veterinary surgeon at Donnington Grove and exemplifies all the mental fortitude and positive attitude that’s needed to tackle the inevitable bumps in the road to success. After 91+ miles I think this photo says it all.

So what did I learn on completion of this surprise challenge?

Prior preparation prevents poor performance ... make time for all those P’s.

Sometimes life will throw you off course and the lesson is to embrace and “ride on” because you might meet some fantastic people on the new route and end up in a better place.

Victoria’s Secret is great for certain activities ... and cycling is not one of those activities.

See you all at the next BEVA challenge! 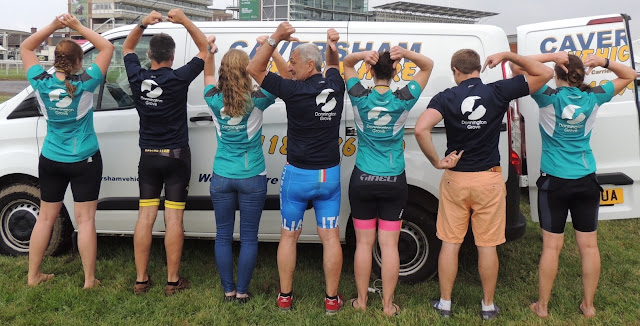